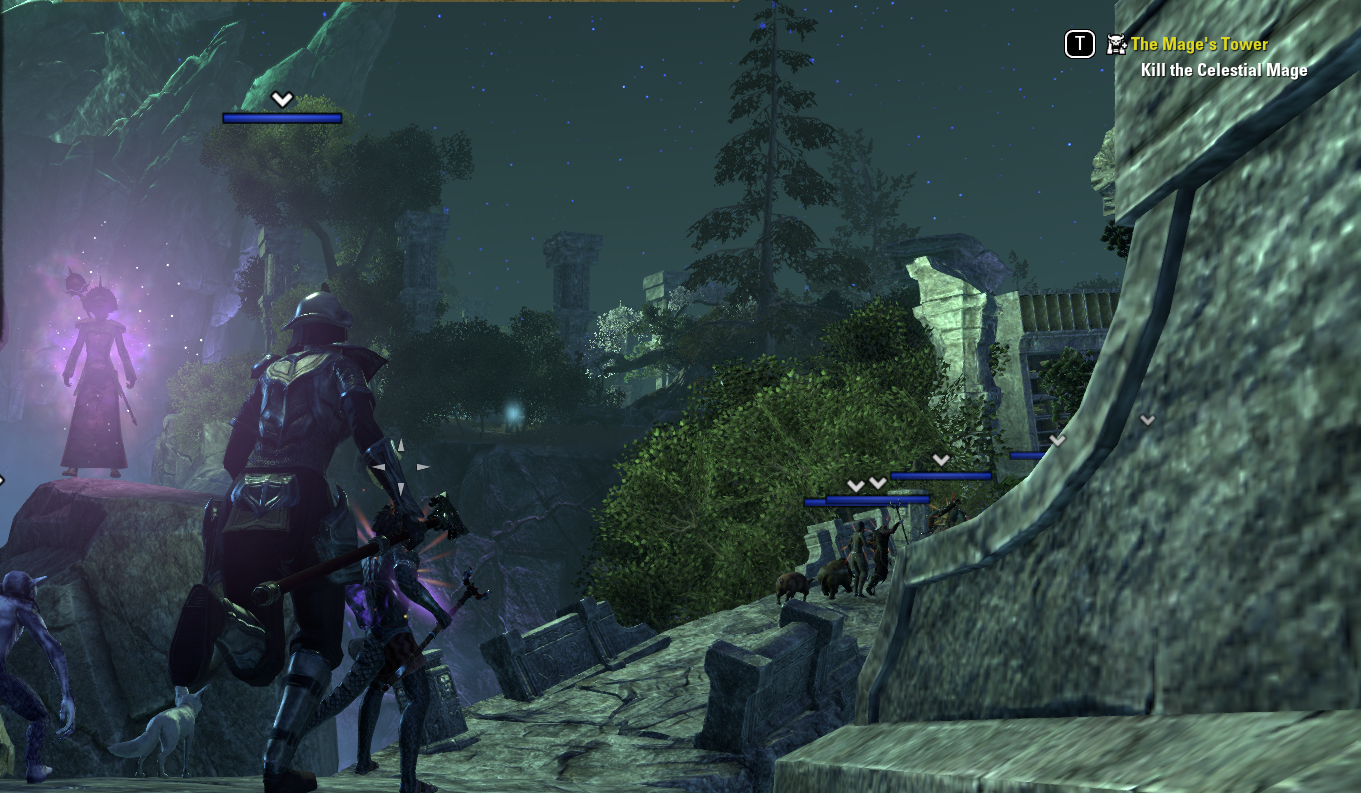 Not one of you noticed Malbec’s bikini…..

What better time to gather the ESO Members and jump into our first Trial in Aetherian Archive.

As we zoned in the usual questions were asked “have/need food”, “charge weapons” etc and then we awaited those all important first instructions. This was ED scripting yet another piece of history and this time in ESO.

We had to start the raid by running through flames until we reached the trashy Flame Atronach’s where we burnt them down with a mighty force.

Another wee run but this time dodging the ice where a call of “I don’t know which way to go” came through our headsets as we run round a maze of frosty bookcases. We all waited by the double doors for them to open so we were all greeted collectively by the Ice Atronach’s.

Then onto the Bannermen or “those that carry those long flag things”, we got them down with ease and the trash was cleared to our first Boss the Lightning Storm Atronach.

Off to the next area which had these lovely shiny platforms.

This is where we reached our toughest challenge; was it working out the mystery of these bright platforms, was it the encounter we were about to endure. No, something far more complex. It was getting the person not in Discord on a platform; vast cheers were heard when they finally stepped foot on the platform.

Why do we stand on these platforms? Well that my friends you have to find out when you come along but take heed, just like the last boy to be picked at the school playground football team, consider yourself cursed when Malbec goes to your platform side…

After the platforms, whilst Malbec still cried, we reached the second Boss, the Foundation Stone Atronach, which gave us a boss fight with adds called Chainspinners and Nullifiers, but in true ED carnage type style we managed to end them all.

It was at this point of the Raid when it was noticed that some were not paying attention from the start as their health was not very big and dying quite quickly and this created our next most challenging task of the evening…….it was a double whammy; firstly and most generously when giving food remember to split that stack, but the kind request for their food to be returned sparked off probably one of the most common queries in MMO slackery “How do you trade in this game”. So more ED history was created by way of a Trade Strategy being given in a Raid.

After Tradegate we met our third Boss Varlariel, Malbec was still crying from platform haters so to cheer himself up he decided to break into Amy Winehouse Valerie after we killed her, she was a ghostly little thing splitting up into little Varlariel’s.

With Varlariel neutralised it was off to the fourth and last Boss The Mage, what could go wrong before we start the encounter…..well…..stumbling on the worlds most dangerous Library wrong that’s what could happen, risking our very existence to read books but we eventually got to the Boss.

Whilst the raid focused on the boss our Tank had just ONE job, that’s right just one job, Tanks in MMO’s these days must be so boring. Anyway, they had to keep the little tiny weenie whiny axes from flying all over the place.

Who would have thought 3 silly little axes would turn a grown Tank into a withering, tourette syndrome mess. In brief it went from…”I got first axe…I got second axe…I got third axe” all good; then “I lost an axe, bloody hell those axes, got them” still ok but then “S*&t those axes, wtf these axes, oh f*%k these axes *deep breaths and sighs* THESE F&%king axes” Boss dies to huge cheers and the Tank’s deep breaths.

It was a cracking night and a massive well done to all, thank you all for coming and creating yet more Eternal Dawn history.

Did I put not ONE of you mentioned Malbec’s bikini….