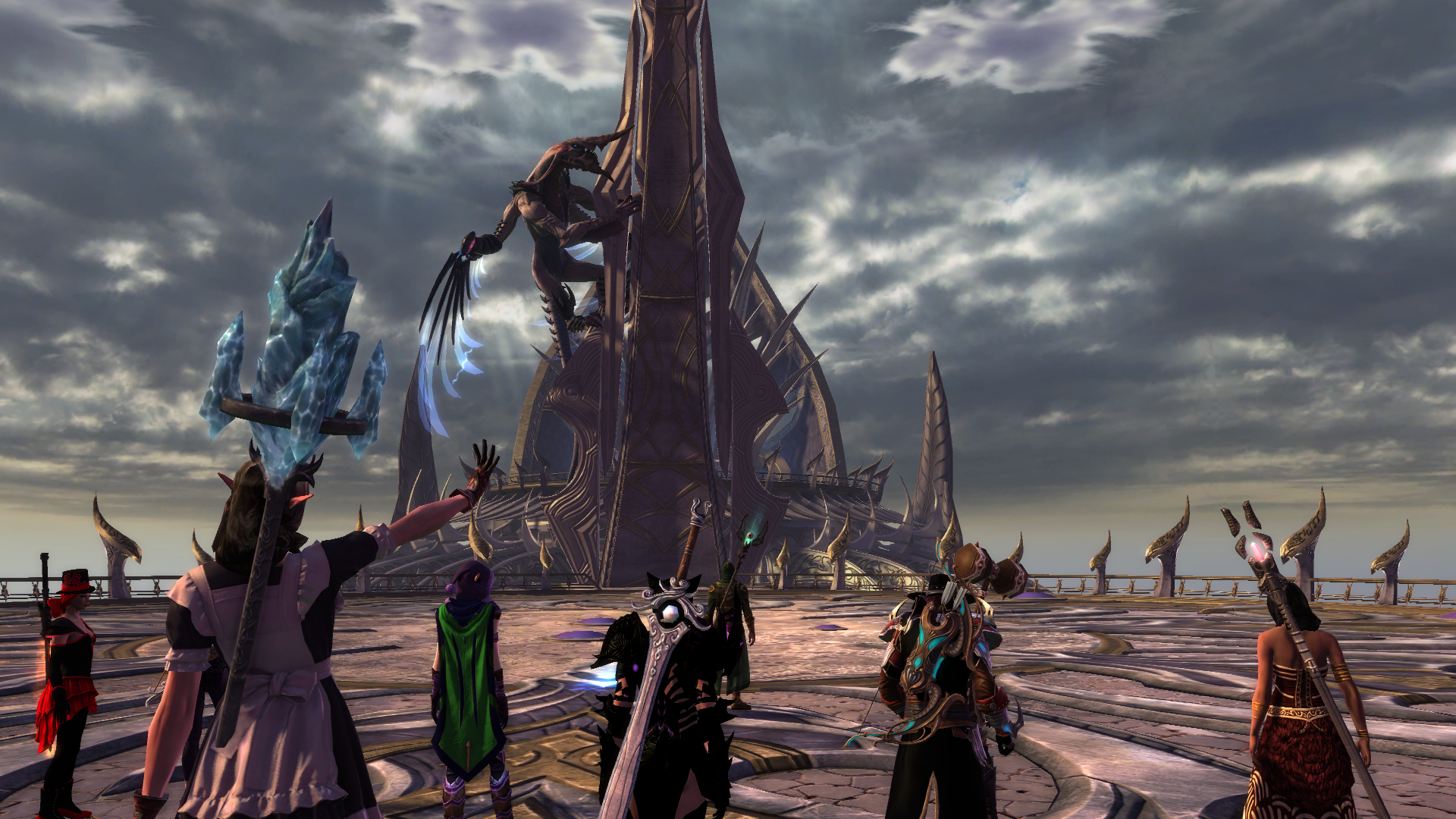 After a very quick run in RoF last Wednesday (under an hour even with new people! Finnie dead on first try!) our hunger for raids was not quite stilled yet so we decided to go back and visit some of the most epic raids and battle with the Blood Storm once again!

First we headed to Infernal Dawn, the lair of Laethys and Maelforge. It was quite awesome to see the raid again, even if most of us were level 65, which made things so much easier. We did have a few of our still leveling members join us in this epic battle though! Thank you everyone that came!

The first two bosses went down without major problems but then Rusila Dreadblade kind of wiped the deck of her pirate ship with us. 😀 Yarrrrrr! We had a couple of tries but it started getting late already so people had to leave and we decided to continue another time.

Yesterday, we headed back there and finally defeated her! We did a bit of research on tactics before heading in though so that made it easier.

Next two bosses were fairly easy again, other than playing an early “find the Easter eggs” game with Laethys’ dragon eggs. That made her quite angry and she made the next fight was a little tricky but we managed to defeat her! She did get a little too distracted by her piles of gold coins lying around in the end.

Then it was time to make our way to the last boss, Maelforge. He was not amused… In fact, he was pretty enraged. We did defeat his minions, his girlfriend and their dragon eggs after all… He gave us hell but we managed to come out victorious after all!

It was a great raid that rewarded us with lots of achievements and quite a few nice wardrobe pieces. One of our still leveling members even got gear improvements! Grats everyone!

But we were not quite done yet… We still had time and motivation left so we decided to try another “old raid”. Of all things, we decided to pick a fight with the Queen of Storms, Dragon of Tyranny – Crucia – in her Frozen Tempest.

Epic “world’s ending” background music got us fired up so after clearing some trash we went to the first boss, sexy Zaviel (“Hey, we’re fighting shards!”). The fight was quite uneventful, just had to remember to kill the swirls to remove her immunity to damage (instead of continuing to hit her without dealing damage like the brain dead zombies we are sometimes <3).

The next mobs were quite funny as one of the bigger guys kept spawning some smaller guys that kept giving experience! lol I’m not sure how much they were actually giving but it gave one of our new still leveling Clerics the idea of wanting to stay there and continue slaying the small guys! 😀 Unfortunately the big guy died shortly after so we had to move on. 🙁

The next boss, (our shard!) Gelidra, had quite bad luck because we defeated her so fast she didn’t even have time to put up her pillars of mass destruction that we would normally have to destroy before she gathers too much energy from them!

Oh but the next bosses gave us hell in return! The twins, Kolmasveli and Toinenveli (“Cole and Tony”) were not happy we defeated their two girls.

It was funny though. We actually had dps problems. But not the kind you usually mean by dps problems. The kind that makes the “Hide from Cole/Tony” mechanic, which is based on time passing, and the “Bomb! BOMB! DEFUSE THE BOOOOMB!!” mechanic, which is based on their remaining hp, line up just perfectly! So we had to hide AND defuse the bomb at the same time… which was quite tricky. We spent quite some time trying to hold back dps and as time passed, some people had to leave, so we ended up with lower dps! Yay! Wouldn’t think we’d ever be happy about lower dps but hey, strange things happen. They still made us go boom quite a few times after that but we managed to defeat them at last! Wooooo! Defeating them was quite satisfying. 😀 Great job everyone!

Now it was finally time to face the Dragon of Tyranny! We had a couple of tries, improved bit by bit but had a few problems due to not quite remembering tactics, especially regarding the turret and the bomb. But it was still a very exciting fight! It was getting late though so some more people had to leave so we decided to call it a night. But Crucia, we WILL return!

Thanks to everyone that came along for the fun and giggles for both Infernal Dawn and Frozen Tempest! Especially our new and still leveling members! You took time off your leveling and gearing schedule to join us and we’re very happy about that, I hope you had as much fun as I did!